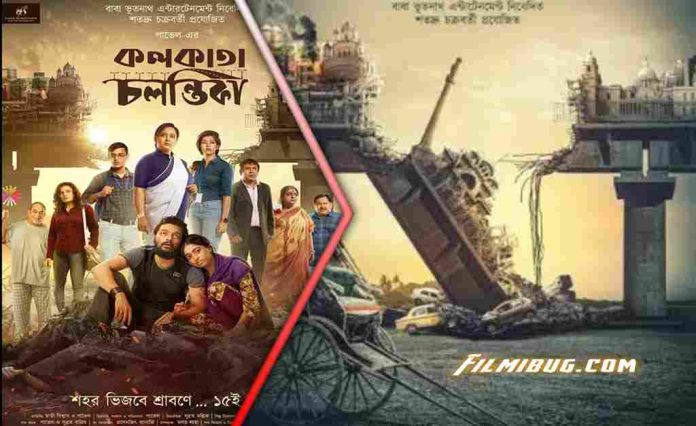 Kolkata Chalantika Movie: Kolkata Chalantika is an Upcoming Bengali language drama film. The movie release date is 25 August 2022. Directed by Pavel. The film starring Ishaa Saha, Saurav Das, Kharaj Mukherjee in Bengali movie in prominent roles. The film is being made under the banner of Baba Bhootnath Entertainment.

Kolkata Chalantika, as the title says, is a dynamic story in the life of the city itself. Banka da, a stadium curator, Dedi, a lady police constable, Shibaji, a college lecturer, Rimi, a female civil engineer, Bonni, an IT employee, Baichung, a street boy and many such characters play important units of the city. As they move, the city keeps moving along with them. All of them have different sorts of life and different stories of life to tell. None of them are ideally good persons but none of them are bad persons either. They represent a collective human spirit of Kolkata. Banka da is a bachelor who got his govt job by serving a political party for more than ten years. He is bachelor and spends his office time in useless talks and watching sports in tv.

Debi has an autistic elder brother to take care and marriage in her life did not materialize only because of him. Amal Das, a copassenger in bus shows interest in her recently and if things go well, they might think of marriage. She needs more money and does not hesitate to take bribe in the traffic signal. Shibaji is all alone. After his college he comes as an LIC agent to chess club under the flyover to play chess with Banka da. Rimi is young but the entire family depends upon her. They indirectly pressurize her to earn more money to fulfill their demands and Rimi earns that by consenting illegal constructions in the city. Bonni represents carefree youth of today, indifferent towards other’s pain. Baichung lives under a flyover. His dream is to marry Tumpa and settle under another flyover and start a happy life.

Q. Who are the actors in ‘Kolkata Chalantika’?

Q. Who is the director of ‘Kolkata Chalantika’?

Q. What is Genre of ‘Kolkata Chalantika’?

Q. In Which Languages is ‘Kolkata Chalantika’ releasing?