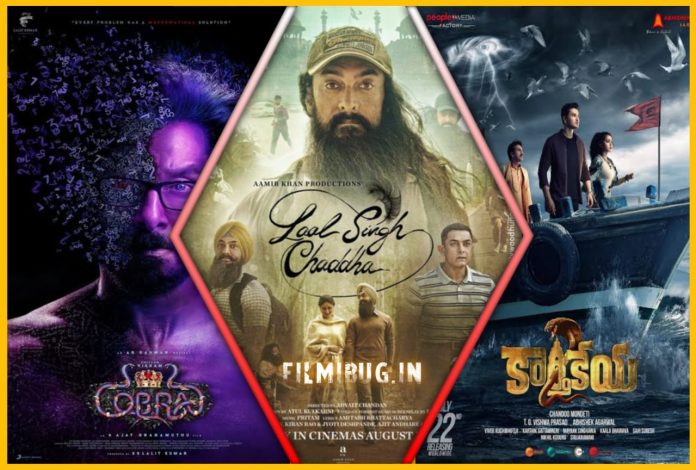 Like last week you will have plenty of options to choose which movie you want to prefer to watch as there are many movies set to hit the theatres and OTT platforms this week also.

Mark the calendar and get the popcorn ready as we have an interesting lineup of movies-shows that we have compiled and think should be on your radar for the upcoming Friday.

Films like Shamshera, Ek Villain Returns, Thor Love and Thunder, and 777 Charlie are already having their dream run at the box office, it will be interesting to see which upcoming film will give stiff competition to these films.

Cobra is an upcoming Indian Tamil-language action thriller film. The movie release date is 11 Aug 2022. Directed by R. Ajay Gnanamuthu. The film starring Vikram, Srinidhi Shetty, Irfan Pathan, Miya George in Tamil movie in prominent roles. The film is being made under the banner of Seven Screen Studios.

Laal Singh Chaddha is an upcoming Indian Hindi-language comedy-drama film. The movie release date is 11 August 2022. Directed by Advait Chandan. The film starring Aamir Khan, Kareena Kapoor, Sanjay Dutt Hindi movie in prominent roles. The film is being made under the banner of \Aamir Khan Productions, Viacom18 Motion Pictures. It is based on Winston Groom’s 1986 novel of the same name, the film stars Aamir Khan as the titular character along with Kareena Kapoor and Naga Chaitanya (in his Hindi film debut).

Raksha Bandhan is an upcoming Indian Hindi-language comedy-drama film. The movie release date is 11 Augus 2022. Directed by Aanand L. Rai. The film starring Akshay Kumar, Bhumi Pednekar in Hindi movie in prominent roles. The film is being made under the banner of Zee Studios, Colour Yellow Productions, Cape of Good Films in collaboration with Zee Studios. It is based on the purest relationship ever.

Yashoda is an upcoming Indian science fiction thriller film written and directed by duo Hari–Harish. Produced by Sridevi Movies, it is simultaneously shot in Telugu and Tamil languages. The film stars Samantha as the titular character alongside Unni Mukundan and Varalaxmi Sarathkumar. Initially scheduled for theatrical release on 12 August 2022, the film was postponed.

Karthikeya 2 is an Indian upcoming Telugu-language supernatural thriller film written and directed by Chandoo Mondeti. Produced by Abhishek Agarwal Arts and People Media Factory, the film serves as a sequel to the 2014 film Karthikeya. It stars Nikhil Siddharth, Anupama Parameswaran and Anupam Kher. Karthikeya 2 is scheduled to be released on 13 August 2022.

Macherla Niyojakavargam is an upcoming Indian Telugu-language action thriller film written and directed by M. S. Rajashekhar Reddy and produced by Sudhakar Reddy and Nikitha Reddy under the banner of Sreshth Movies. The film stars Nithiin, Krithi Shetty and Catherine Tresa. It is scheduled to be released in theatres on 12 August 2022.

Ravi Bopanna is an upcoming Indian Kannada-language drama film written and directed by MV. Ravichandran and produced by Ajeeth and V. Ravichandran under the banner of V Group. The film stars V. Ravichandran, Sudeep and Ramya Krishnan. It is scheduled to be released in theatres on 12 August 2022.

Dharmajuddha is an 2022 upcoming thriller film. The movie release date is 12 August 2022. Directed by Raj Chakraborty. The film starring Ritwick Chakraborty, Subhasree Ganguly, Soham Chakraborty in Bengali movie in prominent roles. The film is being made under the banner of Rana Productions.

Bhotbhoti is an upcoming Indian Bengali-language neo-noir action thriller film. The movie release date is 30 September 2022. Directed by Tathagata Mukherjee. The film starring Rishav Basu, Rajatabha Dutta, Bibriti Chatterjee in Bengali movie in prominent roles. The film is being made under the banner of PSS Entertainments, Pramod Films.

Gaalipata 2 is an upcoming Indian Kannada-language romantic comedy film written and directed by Yogaraj Bhat. A sequel to Gaalipata (2008), it features an ensemble cast consisting of Ganesh, Anant Nag, Diganth, Pawan Kumar, Vaibhavi Shandilya, Samyuktha Menon and Sharmiela Mandre. It will be released on 12 August 2022.

Kadamaiyai is an upcoming Indian Tamil-language action thriller film written and directed by Venkat Raghavan and produced by Syed Zahir Hussain and TR Ramesh, under the banner Ganesh Entertainment and Nahar Films. The film features an ensemble cast Yaashika Aanand, S.J. Suryah and Motta Rajendran in lead roles. Kadamaiyai was scheduled to be released theatrically on 12 August 2022.

Thallumaala is an upcoming Indian Malayalam language action comedy film directed by Khalid Rahman. Written by Muhsin Parari and Ashraf Hamza, the film is produced by Ashiq Usman. The film stars Tovino Thomas, Kalyani Priyadarshan and Shine Tom Chacko in lead roles. The principal photography started on 2021 October 12 and is expected to release by 12 August 2022.

Hindikeda.in does not aim to promote or condone piracy in any way. Piracy is an act of crime and is considered a serious offense under the Copyright Act of 1957. This page aims to inform the general public about piracy and encourage them to be safe from such acts. We further request you not to encourage or engage in piracy in any form. We are repeatedly explaining to you that downloading movies and live streaming from piracy websites can create problems for you. That is why we always strongly advise you to stay away from piracy websites. Legal websites like Netflix and Amazon Prime Video are the only solutions to always watch movies.