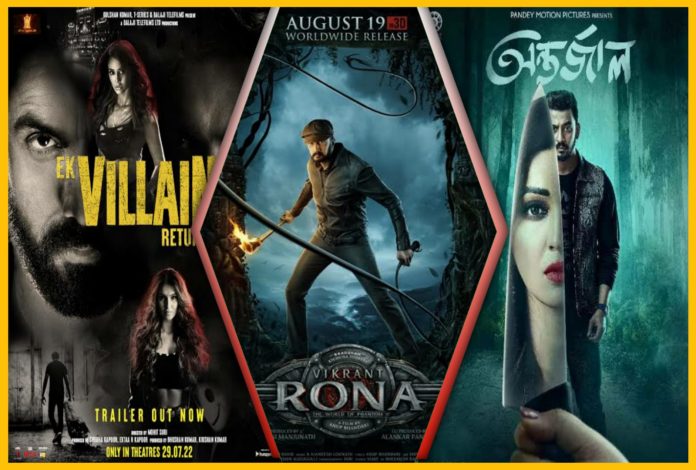 Like last week you will have plenty of options to choose which movie you want to prefer to watch as there are many movies set to hit the theatres and OTT platforms this week also.

Mark the calendar and get the popcorn ready as we have an interesting lineup of movies-shows that we have compiled and think should be on your radar for the upcoming Friday.

Films like Thor Love and Thunder, Khuda Haafiz Chapter 2, Hit the First Case, and Shamshera are already having their dream run at the box office, it will be interesting to see which upcoming film will give stiff competition to these films.

Vikrant Rona is an upcoming Indian Kannada-language fantasy action-adventure film. The movie release date is 28 July 2022. Directed by Anup Bhandari. The film starring Sudeep, Nirup Bhandari, Neetha Ashok in Dual Audio Kannada movie in prominent roles. The film is being made under the banner of Kiccha Creations, Shalini Artss in collaboration with Mysore Talkies, T-Series Films.

Ek Villain Returns is an upcoming Indian Hindi-language romantic action thriller film. The movie release date is 29 July 2022. Directed by Mohit Suri. The film starring Disha Patani, Sanjay Dutt, Tara Sutaria in Hindi movie in prominent roles. The film is being made under the banner of T-Series, Balaji Motion Pictures. It is based on Ek Villain 2014 Movie.

Ramarao on Duty is an upcoming Indian Telugu-language action thriller film written and directed by Sarath Mandava. Produced by SLV Cinemas and RT Team Works, it stars Ravi Teja in titular role alongside Divyansha Kaushik, Rajisha Vijayan, and Venu Thottempudi. The plot follows Ramarao (Teja), an honest civil servant, who is on mission to eradicate corruption to help the people suffering from poverty. Ramarao on Duty is scheduled to be released theatrically on 29 July 2022.

Gulu Gulu is a Malayalam language drama film. The movie release date is 24 June 2022. Directed by Rathna Kumar. The film starring Athulya Chandra, Santhanam in Tamil movie in prominent roles. The film is being made under the banner of Circle Box Entertainment.

Kulpi takes us on a journey to reflect on what it means to be a person with dwarfism – and why people’s obsession with little people has left lasting damage. It’s also a love story between a dwarf young man and a short woman.

Filmibug.in does not aim to promote or condone piracy in any way. Piracy is an act of crime and is considered a serious offense under the Copyright Act of 1957. This page aims to inform the general public about piracy and encourage them to be safe from such acts. We further request you not to encourage or engage in piracy in any form. We are repeatedly explaining to you that downloading movies and live streaming from piracy websites can create problems for you. That is why we always strongly advise you to stay away from piracy websites. Legal websites like Netflix and Amazon Prime Video are the only solutions to always watch movies.