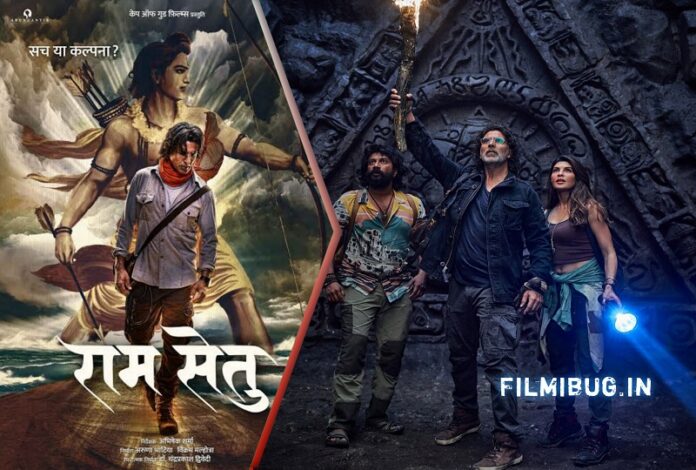 According to the sources, the much-anticipated film Ram Setu starring Khiladi Akshay Kumar is set to enter theatres on Diwali 2022. On Thursday, April 28, the actor took to social media to provide the first look at the next feature film. Many people are looking forward to this picture, and it is one of the most anticipated films of the year.

This film will be released in both Hindi and English versions. Starring in this film will be Akshay Kumar, Jacqueline Fernandez, Raaj Vishwakarma, and Nushrratt Bharuccha, and the film will also include a supporting cast of actors. Ram Setu will be accessible under the category of Thriller.

Akshay can be seen holding a firelight in the photo, while Jacqueline stands next to him, carrying a torch, in the same photo. Satyadev is also shown on the poster. Everyone’s eyes are wide with surprise as they glance up.

Ram Setu is a novel about bridging the past, present, and future gaps. It is a story about the ideals, courage, bravery, and love that serve as the fundamental cornerstone of India’s moral and social fabric, set in the Indian subcontinent.

In this action-adventure drama, the audience is transported to a magnificent location where the protagonist, an archaeologist, is complex at work, determining whether the Ram Setu bridge is a myth or a simple structure. So, are you interested in joining me on this journey of rediscovering Indian ancestry via a creative lens? Then Ram Setu is an absolute must-see!

Akshay Kumar, Jacqueline Fernandez, and Satyadev are all featured on the film’s first look poster, unveiled on Thursday, April 28, by the film’s producers. Akshay can be seen holding a firelight and standing in front of a wall with ancient symbols inscribed on it, giving the impression that he is at a historical location in the photograph posted on Instagram. Jacqueline is standing alongside him with a torch in hand, and the camera pans over to Satyadev, who stands beside them, and all three of them are looking at the exact location.

The filmmaker just published the first look poster for Akshay Kumar’s forthcoming film, ‘Ram Setu. It has gone popular on social media because people see this poster wherever they go. The release of ‘Ram Setu’ is highly anticipated by fans. A significant error has been pointed up by several people who have seen the ad and are taking action as a result.

Akshay Kumar can be seen holding a light in his hand on the poster for the film ‘Ram Setu,’ launched by the actor. A torch is in the hand of (Jacqueline Fernandez), and it is on fire. The torch had to be lighted even though one had one in one’s possession. It is something that the users have not grasped yet.

The historical Ram Setu, which links Rameswaram Island, off the south-eastern coast of Tamil Nadu, India, to Mannar Inland, off the north-western coast of Sri Lanka, serves as the inspiration for the film. According to the Hindu epic Ramayana, it was built by Lord Rama and his Vanar Sena to reach Lanka and rescue his wife Sita from the clutches of the demon Ravan.

Native American culture, history, and ancestry are prominent themes in this novel. It is the mission of Raman Kumar, an archaeologist portrayed by Akshay, to determine if the mythical Ram Setu exists or not.

Nobody Sleeps in the Woods Tonight 2 Movie Download (2021) Leaked By Filmywap, 123movies